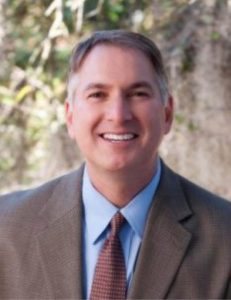 Councilman-at-Large Larry Rolling is no stranger to public service. After serving two terms as District D councilman and dedicating countless hours to local civic committees and boards, this longtime successful business owner for 18 years and proud father of two daughters brings a wide array of knowledge, innovation and experience to the City Council.

In addition to working on the economic development, financial, and public works/public safety committees for the City, Larry launched the Carnival in Covington Parade in 2016 and continues to steer the organization forward as chairman. He also serves on the board of directors for COAST (Council on Aging St. Tammany) and Kelly Kicking Cancer.

In 2012, Larry used his business acumen to develop the Covington Business Resource Workshop Series, which brought city leaders and business owners together to enhance the business climate. This continuing series earned a 1st place statewide award for Community Achievement for Outstanding Community Improvement in Economic Development.

As the Covington Bicentennial parade organizer in 2013, this successful event earned our City a 2nd place statewide award for community achievement for outstanding community improvement in economic development.

Larry was named the 2019 St. Tammany Legislature of the Year by the Alliance for Good Government. He has been active with the St. Tammany Chamber Board of Directors, serving two terms on the board and was named Ambassador of the Year.  He is a 2004 Leadership St. Tammany Graduate, and served on the alumni board for two terms.

In his spare time, Larry enjoys being one of the New Orleans Saint biggest “Superfans.” A season ticket holder since 1978, many local Saints fans can easily recognize Larry in the audience during home games as the “Signman.” 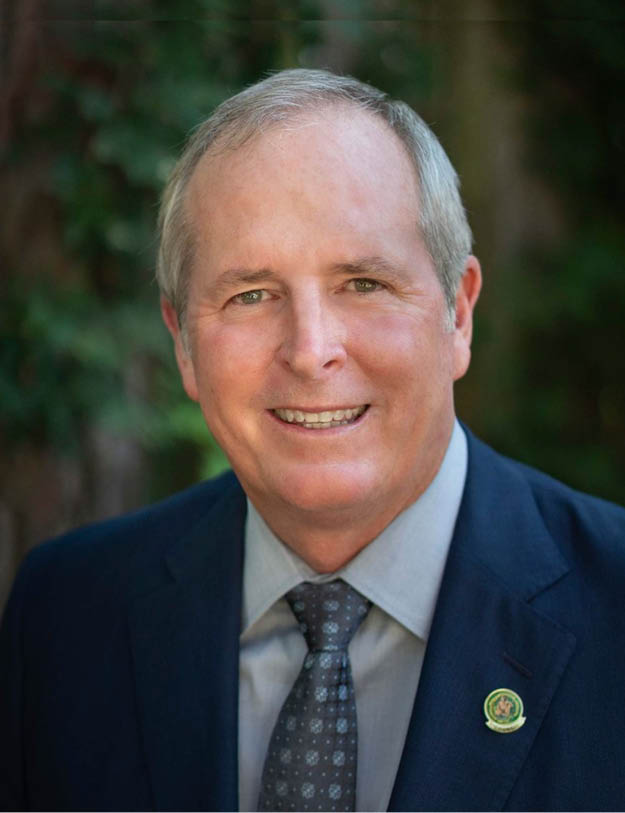 My love for Covington began as a young kid, fostered by family trips from the south shore to Bogue Falaya Park for picnicking, swimming and lots of fun! Some thirty. years later, my wife Molly and I were fortunate enough to make our home in Covington, moving into the quaint, historic neighborhood just blocks away from the park. The quality of life our adopted city offered was everything we were looking for:  Covington offered a "small town feel" with an interesting history, culture, outdoor activities, great schools, and most importantly, safe neighborhoods. Our new home and friends made it a perfect place to raise a family. Our son, Tyler, and daughter, Melanie, were raised and educated in this wonderful city where they have made many "lifetime friends" from every neighborhood. Although they are now fully grown and have moved away to lead successful business careers, they still call Covington home.

As I grew my business helping local clients implement plans to secure their income for family needs and retirement, I also dedicated a great deal of time as a volunteer, coaching and mentoring young people. After residing in Covington for little more than a decade and being very involved with both privileged and less fortunate youths in our community,  I recognized my desire for public service.  I wanted to make Covington the absolute best place it could be.

In 2011, I was elected to represent the people in District E as their councilman and served two, consecutive 4-year-terms. When the council-at-large seat became vacant, neighbors, business owners, friends and family encouraged me to run for office. Realizing that I want to continue serving the public to protect and preserve everything we love about our city and improve quality of life, I successfully ran for the council-at-large seat in 2020.

I'm fortunate and grateful to once again serve our residents and businesses in this unbelievably great city! 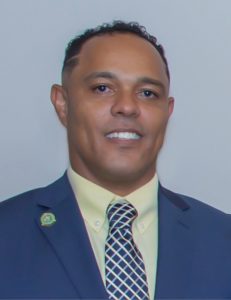 District A Councilman Peter Lewis Sr. is a lifelong resident of Covington and member of First Missionary Baptist Church.  Raised by his parents, the late Paulette F. Lewis and step father Harry Rollins, Peter is a proud father of three children and two grandchildren.  Peter enjoyed growing up in Covington as part of a close-knit community with many neighborhood activities. Preserving this strong sense of community and quality of life is what motivated him to run for office.

Like many children in his neighborhood, while growing up Peter attended Covington Elementary and C. J. Schoen Middle Schools.  Unable to participate in team sports due to a health condition, as an older student Peter focused on music, participating in the marching bands at William Pitcher Junior High and Covington High School. He completed a bachelor’s degree from Southeastern Louisiana University, and today has established a career in insurance as an independent life representative.

Peter showed an affinity for community service from an early age by tutoring younger students during high school and mentoring during his college years.  Since then he has served as a volunteer for Big Brothers Big Sisters of America, president of the Future Business Leaders of America, and as a board member for the SLU Alumni Association.  Professional affiliations include memberships in the Society for Human Resource Management and the National Association for the Advancement of Colored People.

My career path was in retail management until health happened. I am currently an Independent Life Rep.  I have enjoyed being a part of organization like Big Brother Big Sister, CHS Marching Lions, President of FBLA, SHRM, FBLS, NAACP, SMA, NBEOCA, Board Member of SLU Alumni Association. 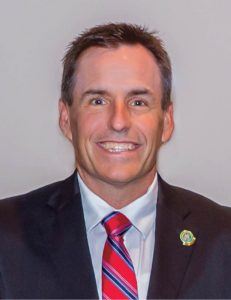 Representing District B, Councilman John Botsford​ makes his home in the Savannahs neighborhood along with his wife and the youngest of their five children.​ He works in downtown Covington as Deputy Director of the Maritime Pilots Institute, a membership-based organization that offers world-class training, education and services to the professional maritime pilotage community. After serving in the Navy from 1985 until 1993, John attended Mesa Community College in San Diego, California while earning a Journeyman Carpenter Degree from Associated General Contractors. Prior to being elected councilman, John served as an appointee to a city council committee that was established to determine the fate of the St. Tammany Parish Emergency Operations Center. Today, he continues to be a dedicated volunteer, serving on the Advisory Board for the St. Tammany Art Association, and as a member of St. Peter Parish, the Savannahs Homeowners Association, and the Mayor’s Council on Healthy Lifestyles. John is also currently enrolled in Leadership St. Tammany and the FBI Citizens Academy. 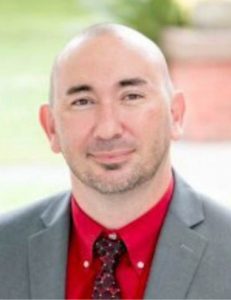 District C Councilman Joey Roberts moved to Covington from New Orleans East when he was 14 years old. The move changed his life forever, and for that reason the City holds a special place in his heart. A graduate of Covington High School’s Class of ’95, Joey attended Southeastern Louisiana University where he majored in Kinesiology. He worked for the St. Tammany Parish School System for 12 years prior to becoming Executive Director of the West St. Tammany YMCA.  Joey said politics was never a goal for him, but helping others is his passion and purpose. As councilman, he’s sworn to be honest and diligent in maintaining the integrity of the city, while being a voice for local residents. “I want Covington to be the same opportunity for others as it was for me 30 years ago,” he said. 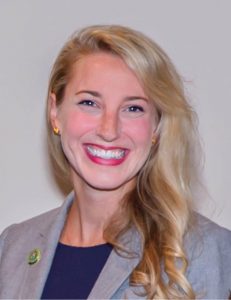 In addition to representing Covington’s District D on the City Council, Cody Ludwig works as a consultant of Krewe Marketing, a local design, public relations and events firm that she and her husband started as college students back in 2005. A Covington native and graduate of St. Scholastica Academy, Ludwig earned a Bachelor of Science degree in Business Administration with a concentration in Marketing from Louisiana State University. Prior to working for the City as their Cultural Arts and Events Coordinator, Ludwig was the marketing director for a wealth management advisor and retirement specialist at Northwestern Mutual.

While she previously directed events benefitting several nonprofits around town, Cody feels most proud of co-founding and chairing the Covington Celtic Club and St. Patrick’s Day Parade, as well as the annual Oxtoberfest Beerfest, which benefits the Boys and Girls Club of Covington.

“I’ve learned over the years that one person can make a large impact on a small community with hard work and passion,” Cody said, “I love my town and neighborhood and I am honored to be serving in a more formal capacity on Covington's City Council.”

Ludwig is married to her high school sweetheart, Nick Ludwig, a St. Paul’s alumni, and the couple has two young daughters, Reese and Remy.  The Ludwigs enjoy living in downtown Covington, where they take full advantage of biking and walking to all the wonderful events, concerts and markets that the city has to offer. 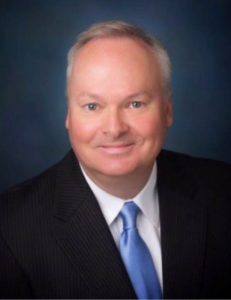 Mark Verret, a Covington attorney, represents the District E seat on the Covington City Council. Councilman Verret graduated with a Bachelor of Science degree in Criminal Justice from the University of Southwestern Louisiana (now University of Louisiana-Lafayette) and earned his Juris Doctorate from Mississippi College School of Law. He has practiced civil litigation law in Covington for more than 20 years representing local citizens and businesses, as well as Fortune 500 companies, the St. Tammany Parish School Board and the Covington Police Department. Mr. Verret is licensed to practice law throughout Louisiana, Mississippi and Texas along with the federal District Courts including the United States Fifth Circuit Court of Appeals and the United States Supreme Court.

Mr. Verret is a graduate of the Litigation Management Institute held in conjunction with Loyola University School of Law in Chicago, which is the first certification program specifically designed to provide a comprehensive understanding of the business of litigation management.  Additionally, he has studied mediation and negotiation skills at Pepperdine University in California. Mr. Verret formerly served two terms as President of Versailles Homeowners Association and is currently active and involved in announcing carnival season to St Tammany Parish and the Northshore as Captain and Member of the Board for the local Twelfth Night Marching Club St. John Fools of Misrule. Additionally, Mr. Verret serves as  President of the Covington Heritage Foundation whose mission is to preserve the City’s culture, character and community.

Mr. Verret states that infrastructure, drainage and preservation concerns are important issues to Covington and to him. “Covington has been blessed with a tremendous amount of resources, starting first with its resilient residents, and with the ever-increasing amount of growth, it is imperative to have a clear vision towards the future while preserving the very rich cultural and historical past.”

Mr. Verret is married to Kellie Bramlett Verret and they have two sons, Jack and Nicholas Verret, who have both graduated from St Paul’s in Covington. They are proud to call Covington home.